26. Less is More: how to keep your writing clear and simple

In a guest post on The Writing Well, on May 14, I discussed showing (dramatizing) vs. telling (summarizing) in fiction writing. In order to dramatize without over-dramatizing, it helps to make your language as simple as possible. LESS wordiness almost always means MORE impact.

Be stingy with adjectives and adverbs. The fewer you use, the more powerful your writing. The trick is in choosing the one or two best modifiers.

He angrily slammed his fist on the bar. "Get out of here, you son of a bitch!" he snarled rabidly, his face contorted in rage. 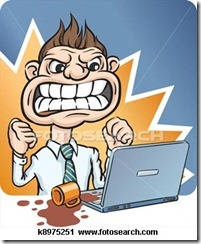 See how much simpler—and more effective—this passage is if you get rid of some of the indicators of anger:

He slammed his fist on the bar. "Get out of here, you son of a bitch!"

Trust your readers... and trust yourself. Sometimes, as writers, we are unsure of our ability to convey strong emotions, so we tend to overdo it. With simple, clear writing, you only need to make your point once--you needn't beat your reader over the head with it. Compare these passages with their simplified revisions:

Her eyes filled with tears of joy. "Oh, Michael," she breathed softly, her face full of love. "It's... it's beautiful," she added, her voice trembling with emotion. Never had she felt such love.

Her eyes filled. "Oh, Michael," she breathed. "It's beautiful."

A sense of power surged strongly through him and he raised his fist in the air, pumping it three times. "Yes!" he cried triumphantly. He would make all the small, petty little people cringe and pay for what they had done to him.

A sense of power surged through him and he raised his fist. "Yes!" he cried. He would make them all pay.

Bear in mind that the context usually gives plenty of hints about what is going on. For example, in the first example above, we would know it is a love scene. In the second, we probably already know how he feels about the people he will "make pay"--and what he feels they have done to him.

Finally, a personal bugaboo, don’t EVER use the word “hysterically” in describing how someone weeps.

All you really need here is:

“Leave me alone!” she sobbed.

Tomorrow: Give yourself credit as a writer.