There is an inevitable moment--and sometimes more than a moment--when you get stuck somewhere in your novel. For some of us, this happens in the first few pages. But it is more likely to occur later on, when you already have a story, you have characters you understand and care about, but you just... can’t... write.... another... word.

For times like these, I recommend the following tricks. I know they work, because I use them myself.

1.  Probably the easiest way to get un-stuck is to write a scene that you know you can do, even though it does not belong where you are chronologically. For example, in Pandora’s Children, I was stuck in the section where the Principal is recovering from his injuries but not sure what he will do next. This is because *I* wasn’t certain what he would do next.

At first I tried to solve this problem by inventing a diplomatic war with a leader to the north, but this did not fit either organically or dramatically. Since I knew what Zach was up to, however, I went ahead and started on the Road Men story. For some reason this jogged my brain, and I was able to move on to the Principal’s next actions, which included his attempts to improve long-distance communications in the District.

2.  A somewhat related technique that works particularly well if you are stuck near the beginning of the story is to write a scene or scenes that take place BEFORE the story begins. This can be very freeing, because you do not have to make this scene mesh with any other scene in the book. It can also be an excellent way to get to know your characters better.

I wrote many, many prequel scenes for the Pandora’s books. Some of them made it into the final publications, and some may turn up in part three. All of them gave me a better understanding of Zach and Will and the creation of the District.

3. If all else fails, my standby cure for writer’s block is to write one sentence every night before you go to bed. If you want to keep going beyond one sentence, that’s fine, and it’s common to find that sentence stretching into a paragraph or even a few pages. But the iron-clad rule is ONE SENTENCE EACH NIGHT. You aren’t allowed to go to sleep until you have done that.

I actually wrote most of the first draft of my YA novel, Going to See Grassy Ella, this way. 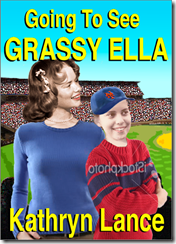 I didn’t have it particularly plotted out until I was pretty far along in the story. But I had two characters I adored, with voices I was very comfortable with. So I wrote a little bit each night until I finally had most of a complete story and was able to finish the rest of the book relatively easily.

Tomorrow, another special Blogathon post, this one on my “second act.”