I have written here previously about science fiction as the most relevant genre
for the present-day world, the only one that comes close to capturing what it is like
to live in the first part of the 21st--and possibly final--century. So many mainstream
and literary writers have adopted sci-fi tropes that there is scarcely a divide anymore
between popular fiction and sci-fi. Margaret Atwood comes to mind, as well as Junot
Diaz, and many other "literary" writers. Well-known sf classics like On the Beach and
1984 have acquired a renewed relevance, but there are also many lesser-known works
from the previous century that resonate with aspects of our Brave New World, as it
was termed by Aldous Huxley in 1931.

For reasons of sanity, I cannot bear to read much current literature, and have begun
to return to my roots in the classic science fiction of the 1940’s, 50’s, and 60’s. So far
what I’ve been reading is even better than I remember. I’ve begun with one of my
favorites, the man who could arguably be called the greatest of them all: Robert A.
Heinlein. Scientist, popularizer, visionary, and above all a consummate story-teller,
Heinlein was immensely influential not only on subsequent science fiction, but also in
mainstream literature and culture. For example, Heinlein invented the concept of
“waldos”--mechanical hands that could manipulate in places too dangerous for humans.
He was the first to popularize the idea of colonizing the moon, and perhaps the first
to suggest that this project might be done by private enterprise. His compulsively-
readable novel, Stranger in a Strange Land (1961), was the first sci-fi novel to make
the NY Times best-seller list, and gave us the concept of water beds as well as the
Martian verb “to grok” (roughly, to understand deeply).


All of his novels--at least the earlier ones--are well worth reading. Next to Stranger in a
Strange Land, Heinlein’s best-known novel is Starship Troopers first published in 1959.
I recently re-read it with great pleasure and not a small amount of awe. 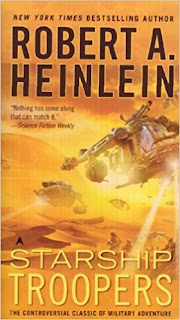 Starship Troopers is as relevant today as it was when Heinlein wrote it. As entertaining,
too. I especially recommend it to other writers as an example of gripping storytelling that
seems to break all the rules. With no traditional plot, with dozens of named characters,
many of them literally expendable, with many pages of technical details about the logistics
and hardware of military training, the novel nevertheless grabs the reader from the beginning
and doesn’t let go until the inevitable but still somewhat surprising end.


It is a first-person narrative told by a teenage boy who impulsively enlists in the
Terran Mobile Infantry, a branch of the armed services, which offer the only way a
member of society can become a full citizen. The story follows our hero from his first
day of boot camp through the early years of his role in combat. Although we do not know
much about the politics of the situation, it is clear that Earth is united in a deadly battle
with alien “Bugs,” and that our space-suited soldiers are perhaps all that stand between
our home planet and ultimate conquest by the aliens. The combat is not at all glorified;
it is described as terrifying, dirty, and necessary. To me the most remarkable aspect of
Starship Troopers is its solid depiction of life in the military as akin to living in a kind of
especially close family. The values of loyalty, camaraderie, dedication to a cause--the
good side, if you will, of tribalism--all are demonstrated in ways that let us, as readers,
feel them ourselves. Reading this book has helped me to understand why so many
people from such diverse backgrounds choose to become military “lifers.”


There are some anachronisms, and as with most science fiction of that era, Starship
Troopers depends on paternalistic, sexist stereotypes in its depiction of women. Unlike
many twentieth-century authors, however, Heinlein did portray women serving in many
roles, from rocket pilot to head of state, that were closed to them in the real-life world.


I understand that Starship Troopers was made into a movie, which I did not see and
have no desire to see. I want to continue to picture it in my imagination, as vivid as
when I read it. And I want to continue to ponder Heinlein’s authorial magic, as I did
when I frequently stopped reading to ask myself, over and over: How did he do that?

Some of my previous posts focusing on science fiction:
How Science Fiction Could Save the World
A Kinder, Gentler Apocalypse
What Makes Science Fiction Different From Other Literary Genres?