48. How to keep your readers turning pages. Part I: the Cliff

In coming posts we’ll take an in-depth look at suspense—the plot element that keeps readers turning pages. Today we’ll examine one of the most venerable techniques for creating suspense: the cliff-hanger chapter ending. 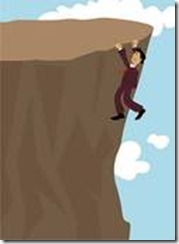 The term “cliff-hanger” originated with old movie serials, which sometimes featured the hero dangling from a literal cliff before the film faded to black. Naturally, viewers would rush back the next week to discover how the protagonist escaped. In modern fiction, the same device is often used to end a chapter, especially in genre and children’s fiction. Instead of literal physical danger, the peril is often psychological (a horrifying secret is revealed, the protagonist receives shocking news).

Whatever the nature of the “cliff,” as we used to refer to them when I wrote my children’s suspense series, it is designed to keep the reader going for “just one more chapter.”

I used the cliff technique in my first two Pandora’s books, which each had three protagonists with alternating stories. I often ended one character’s story on a very dramatic cliff, and in the next chapter switched to  another character, describing how she or he got out of the peril that had ended his or her previous chapter.

Here are some examples of cliffs. Note that any type of cliff can contain elements of other cliffs, combining, for example, scary and thwart. The more dramatic the chapter ending, the more likely your readers will turn to the next chapter.

SCARY CLIFF: It was so foggy she couldn’t see, but she heard the relentless pounding of feet behind her. Her breath was now coming in ragged gasps, and she couldn’t help slowing her pace. In desperation she glanced back—and saw a looming shape, now only a few yards behind her.

THWART CLIFF: As the zombies continued to pound the door, he glanced frantically around the room. A small window near the ceiling—would he be able to fit through it? He’d have to. Quickly, he pushed the heavy table to the wall under the window and climbed onto it. He could just reach the window. He ripped off his jacket and covered his hand, then smashed it into the window, hearing the satisfying tinkling as glass fell. Just as the door splintered and fell into the room he heaved himself up onto the sill… and saw the bars on the outside of the window.

SURPRISE CLIFF: When she glanced up, she felt her heart stop. It was Leigh—come back from the dead.

EMOTIONAL CLIFF: He continued to sit there, tears in his eyes, and I realized that everything he had ever told me had been a lie.

CHEAP THRILL: This is a special kind of cliff, used mostly in children’s thrillers. At its most raw, it’s a kind of cheat, and involves a false cliff. The Scary Cliff example above would be a Cheap Thrill if the first sentence of the following chapter were: She felt a familiar hand fall on her shoulder and a gruff voice said: “Tag! You’re it.”