Dostoevsky and the Sandy Hook Massacre

Note to my readers: Novels can present and elucidate difficult moral and psychological issues in ways that no other medium can match. The horrifying massacre at Sandy Hook Elementary School, again demonstrates that Dostoevsky’s greatest novel, The Brothers Karamazov, has as much relevance today, in 21st-century America, as it did in late-nineteenth-century Russia, when it was written. 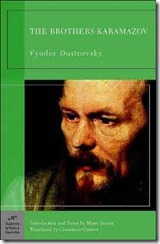 I’ve been thinking about Ivan Karamazov lately, and so--a Google search revealed--have a number of columnists, including Ross Douthat of the NYT; Sean Kirst of the Syracuse Standard; and Chris Owen, a blogger on religious topics. In “Pro and Contra,” Part 5 of The Brothers Karamazov, Ivan, the oldest brother, and his youngest brother, Alyosha, the putative hero of the novel, discuss the existence of god and the existence of evil in the world. Ivan, who is a learned man, has been reading news accounts of the suffering of small children at the hands of their parents and other tormentors. As a good-hearted, empathetic man, Ivan cannot accept the existence of such evil in the world and explains to Alyosha, a novice monk, why the suffering of small children leads him to despair and doubt about a benevolent God.

The writers I cited above focus on one answer to Ivan’s argument--given implicitly by Alylosha and later in the book more explicitly by Alyosha’s mentor, the kindly Father Zossima-- that at judgment day all will be revealed and we will understand the necessity for suffering. But Ivan doesn’t buy it.

It is not, he tells Alyosha, that he doubts the existence of God, rather that he cannot accept a system in which the ultimate happiness of mankind depends on the unavenged tears of innocents.

"Imagine that you are creating a fabric of human destiny with the object of making men happy in the end,” Ivan tells Alyosha, “but that it was essential and inevitable to torture to death only one tiny creature ... And to found that edifice on its unavenged tears: would you consent to be the architect on those conditions?” Ivan asserts that he would not accept such a bargain, that such a price for admission to heaven is much too high. “And so,” he concludes in one of the most famous passages in the novel, “I hasten to give back my entrance ticket.... It's not God that I don't accept, Alyosha, only I most respectfully return him the ticket."

The moral arguments in The Brothers Karamazov (and other works by Dostoevsky) are so effective because the writer created such believable characters, real-seeming people we can identify with and understand, even when we do not agree with them. Ivan’s arguments have always resonated with me, just as Alyosha’s or Father Zossima’s have rung true to other readers.

Today, more than 130 years after Dostoevsky completed his great novel, Ivan’s words make me  think of Sandy Hook and what happened there. At present it appears possible, even likely, that this unspeakable tragedy may lead to some small measures toward national gun control. It is clear from accounts in the news and on TV that the slaughter has changed a lot of minds on all sides of the political spectrum. If this new perspective does lead to some restrictions on gun possession, it will be a very good thing for our country.

But a part of me hangs back from celebrating. If sensible gun control laws are finally implemented, the message seems to be that a rational gun control policy could not even have been talked about until after the brutal sacrifice of twenty small, innocent children. I can’t help but wonder what Ivan Karamazov would have to say.